Going Circular: How to Include Human Happiness

In our previous post we discussed the benefits of a circular model in manufacturing, but the question arose as to how can we design it to be beneficial to the people as well as the planet? How can it better appeal to the mainstream public and inspire faster change and action? We need a model that allows citizens to start their own circular initiatives.

The answer to these questions lies with the Doughnut economy. A doughnut model that could solve all the social and environmental problems in the world.

Can the Doughnut Economy Be the Solution?

The Doughnut economy was designed by Kate Raworth in 2012 as an alternative model to the linear economy. The Doughnut highlights the social and environmental consequences of today’s economy including:

The first comprises the 12 Dimensions of Social Foundation. These are some of the agreed social rights and minimum living standards that should be shared by all citizens, as outlined in the UN’s Sustainable Development Goals.

The second is the ecological ceiling which consists of 9 boundaries. These will help safeguard the planet and stabilize the life-supporting systems we need (fertile soil, a stable climate, protective ozone layer).

Kate’s diagram can be seen as a 21st-century compass as this alternative economy is seen as a practical solution to combat social inequality and environmental degradation. 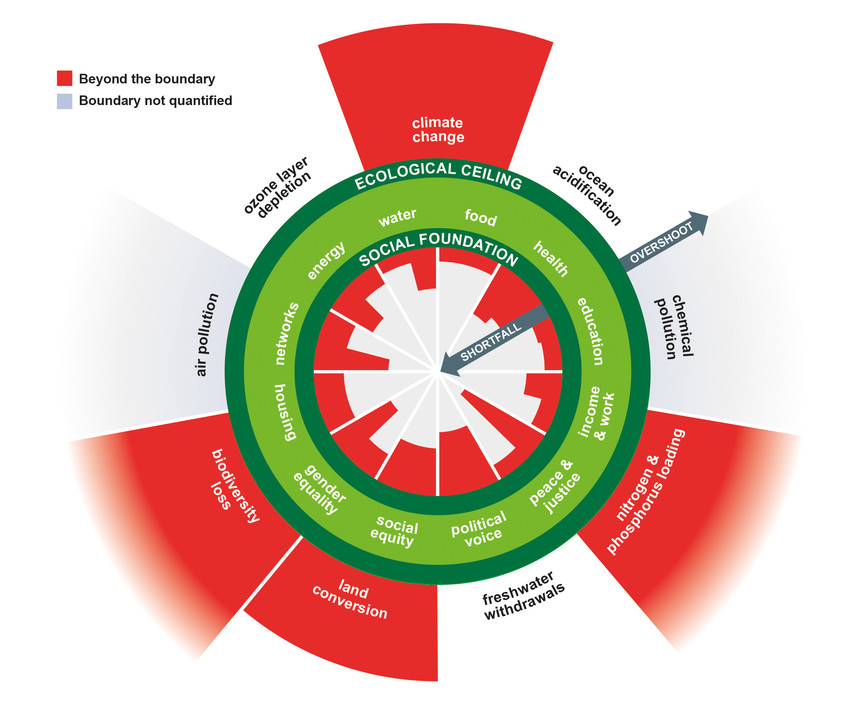 Who are We Now? 5 Broad Shifts of the Economic Self

From Self-Interested to Socially Reciprocating

In conventional capitalist economics, humans are seen as self-interested consumers, but we’re actually reciprocating, social creatures. Scientifically, homo sapiens is seen as the most cooperative species in the world. One reason is that they need cooperation to survive. We cooperate to evolve and punish those who threaten our community.

From Fixed Preferences to Fluid Values

The linear economy believes that adults have set preferences with static consuming habits.

Edward Bernays, known as the father of public relations, rightly said in 1920 “We’re governed, our minds moulded, our taste formed, our ideas suggested, largely by men we have never heard of” (Raworth,2017). The fact is that our minds can be moulded and we are open to anything if it stands for the same values and ideals as ours.

From Isolated to Interdependent

In theory, the economic self is separate and competitive, not affected by the choices of others, but are we really? Henry Poincare, a universal mathematician, said “people tend to act like sheep” (Raworth, 2017). This phrase has negative connotations for many, as we all want to be unique. Yet, it is no surprise that we are massively affected by social influences daily. Our behaviour, habits, likes and distastes are affected by our surroundings and the people within them. We talk, listen, share and collaborate as this brings us closer as a species. So, it is more likely that we are interdependent and collaborative than isolated and competitive.

From Calculating to Approximating

We are not machines, programmes or robots, so it means we are not calculating and exact. We are human, we use our gut instinct and quick decision making to live and function within society. So, we can be seen as more approximating and intuitive than calculating.

From Dominant to Dependent

We have always perceived ourselves as conquerors rather than citizens. The truth is that we are embedded in this world, not separate from it. We depend on the air we breathe and the water we drink. Yet, only when we change our consciousness, will we start to care and act not only for our interests but also for the benefits of our entire ecosystem.

People talk about the circular economy, but they only speak from the manufacturing side. Who is talking about the people side? How can we integrate this better, alternative model for humans to engage with and benefit from? How can we create a shift in consciousness and make it more appealing for the all the citizens of the world?

Let’s use the five flaws of the economic self to come up with examples that promote a better working life within a circular economy. We already explained the five reasons behind these flaws. Now, let’s try to create a possible blueprint for implementing living within a non-linear economic structure.

We are social beings, we like to share, reciprocate and help. These traits can be included in the modern workplace in different ways. For instance, employees could be included in all stages of production to see how their part contributes to the bigger picture. This would help create a sense of satisfaction and demolish alienation from the workplace. We already see these models in cooperatives and forward thinking companies where everyone is part of the decision making process.

Our minds can be re-moulded as we are open-minded people. So, a possible way to integrate a behaviour change would be to volunteer with work colleagues. Volunteering can help combat stress, obtain a sense of purpose, socialize more and open your mind to different realities.

Another way to expand one’s consciousness is to participate in events or have people come speak at your workplace. These can be social, religious, environmental, political or economic events that expand curiosity and help understand how other people see the world. This can lead to greater equality and community feeling.

Being interdependent and collaborative is one of the traits that differentiate us from other species. One way to improve and strengthen this trait is to build trust with co-workers. By communicating more- listening and talking about a wide variety of subjects. Get to know the people that you see every day on a more personal level. Try it with the rest of your community, too. Try volunteering just a few hours a week and see the social impact you’re making. Trust the people you pass by in the street so you can feel part of something bigger.

On a more individual note, personal care should take centre stage in a working environment. Businesses should offer support services that cover mental health, work flexibility, social support and family leave. This is because when we work as a team; when we humanize employees and take care of their situation, we can thrive. Like that, a building can turn into home and workers into a family.

Work culture does not have to be draining and stressful if you trust and rely on the people you’re surrounded with- if we support each other.

We love short cuts and time saving and by going with our gut feeling, or instinct and it can enable us to make better and more determined decisions. An excellent way to promote this thinking is to have meetings that include all employees. Brainstorming and coming up with fresh ideas doesn’t always have to involve superior knowledge. We can be surprised how thinking outside the box can benefit a business.

Another way this could be done is by having co-ops and board members from each division. In this way, the business would be led by workers rather than a structure with a hierarchy and inequality. Flat, more equal management structures are inclusive.

For example, the town of Wolhagen in Germany uses 100% renewable energy, and the business is owned and led by its inhabitants. In 2003, when the contract expired with E.ON, the town officials decided to buy back the town’s power grid. After that, the they started building biogas, solar and wind farms. As a result, this town is now both sustainable and completely self-sufficient.

Citizens of the World

Transitioning from ‘unconscious consumers’ to citizens will need a total profound shift in consciousness. To feel part of our surroundings and the world we live in, we need to interact more with it. You could:

These interactions can be done weekly, bi-weekly, or whenever convenient.

Choose the Doughnut for a Better Life

The circular economy is the perfect alternative to the linear model, but so far, it doesn’t take into consideration citizens. That’s why the Doughnut economy looks like the missing piece of the puzzle. By integrating the Doughnut diagram, we would actively solve social shortfalls and environmental overshoots.

On top of that, by using Kate Raworth’s 5 Flaws of the Economic Self, we would also be able to create a blueprint for people working in a circular environment. In this way, the circular economy would benefit manufacturing as well as the environmental and social aspects. With this shift, our lives can only improve.