We see a lot of companies, particularly clothing brands, claiming to have environmentally-friendly credentials as a means of attracting conscious shoppers to their stores. However, it has been proven that not all companies know exactly how environmentally friendly – or usually, unfriendly – they really are.

In 2011, Greenpeace inspected the water outputs of multiple riverside factories in China, including those producing garments, in response to it being published that 50% of China’s water had been deemed unsafe for human contact. It was believed that these factories were dumping toxic chemicals into rivers, and this meant that these chemicals were coming through into food and drinking water, affecting the health of both wildlife and humans. After collecting water samples, several toxic chemicals were found – some of which were already banned throughout Europe due to their adverse effects on sexual development and the immune system. Crucially, these chemicals were found to be persistent; they would remain in the environment. In addition to affecting humans through the food and water they consume, the chemicals were found to also be harmfully affecting marine life – washing clothing containing the toxins was leading to them being broken down and released back into bodies of water, where they were disturbing animal hormones.

Upon investigating the companies using these factories for suppliers, multiple international brands including Nike, Adidas and H&M were found – despite many of these brands promoting their care towards the environment. Greenpeace published their ‘Dirty Laundry report’ in July 2011, revealing that these companies simply didn’t know which chemicals were being used by their suppliers, meaning their environmental claims were often completely false. Until steps were taken to look into their supply chain, Greenpeace said, these brands could not really make such claims at all.

The solution to this problem came in the form of the Detox Our Future campaign, which encouraged brands to work with their suppliers to alter the ways their clothes were manufactured in order to eliminate the use of eleven different groups of toxic chemicals. 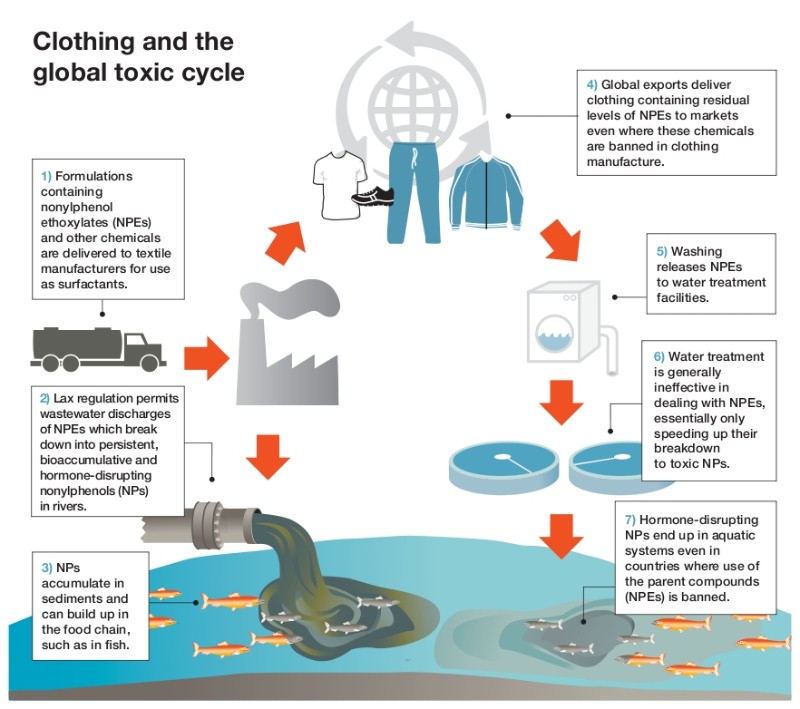 The ways that factories’ toxic chemicals can damage both humans and wildlife.

The first brand to comply was Puma, committing to erase hazardous chemicals from production by 2020. Since then, a total of 76 international brands have committed to the Detox campaign. This means that these brands will need to substitute hazardous PFCs with safer alternatives, become totally transparent in their supply chain and set out a clear plan of how they will achieve this by 2020, so that they can then claim that their production is environmentally friendly. You can see the list of companies who have committed, and how far they are complying with the criteria so far, here.

Movements like these will hopefully start to change the garment industry around for the better, saving both our natural environment and our own health! Yet still there are brands who are refusing to change the impact they are having on the environment – including GAP, Armani, Diesel and Christian Dior, so there is still a way to go. As consumers, we must proactively choose which companies we invest our money in to show brands that we do care.