Building a Circular Relationship with Our Oceans

Most of us have gradually come to realise the significant crises facing our oceans, as human factors have placed the Earth in a new geological age for the first time. As carbon dioxide emissions rise, the oceans increase in acidity. It is also estimated that with each degree of increase in global climate temperatures, the oxygen levels of the sea decrease by as much as 6%.

Plastic pollution is causing huge problems, with fishing equipment being a major source of plastic in our oceans. An estimated 640,000 tonnes of fishing lines, pots and traps are lost or abandoned annually. We’ve all been traumatised by horrific tales of turtles and whales dying horrible deaths as they are ensnared or injured by discarded fishing gear. Yet, despite UN regulations, industrial fishing nets can still be up to 2 miles long and 50 feet high. This gear is regularly discarded, detached or lost through malfunction or adverse weather conditions.

RubyMoon are proud users of ECONYL®, a material made by recovering and recycling fishing equipment. ECONYL® has been embraced in recent years due to its close representation of traditional nylon and its ability to be recycled without declining in quality. However, we remain dedicated to innovating fully sustainable products, which leads us to tackling another major but far less visible plastic problem: Microfibres.

Microfibres are tiny strands of plastic, less than 5mm long and invisible to the naked eye. These fibres, shed from our clothing, make up 15-30% of the plastic waste in our oceans and are at least as deadly as bigger, more obvious debris.

Their micro-form gives them a proportionately large surface area for absorbing toxic chemicals. This means that they are introduced at the very beginning of the food chain through the plankton that obliviously eats them. This means that toxic chemicals work their way back up the food chain, and no creature is immune. Even humans consume as much as a credit card’s worth of plastic each week!

Microfibres are released every time we wash synthetic clothing, even those that use recycled materials. Econyl has the potential to avoid this release of microfibres, as it is spun in a way that makes its strands longer than regular fabrics. Unfortunately, not enough research has been done to prove whether this is actually the case. At RubyMoon, we are determined to do more research, taking a ‘know your enemy’ approach to learning what our impact is and how it can be consistently improved.

It’s no revelation that plastic waste endangers our oceans, but the message is only truly voiced by those of us who seek to save the oceans from human activity. Our empathy for the oceans is contradicted by political legislation encouraging fear. For example, the oceans involvement in tragic natural disasters is often seen as a reason to control and dominate the seas. The two perspectives are incompatible and contradictory when it comes to managing our oceans.

But is there another angle? While we are certainly responsible for saving our oceans, research suggests the oceans have huge potential in saving us too.

A Vision of The Future? 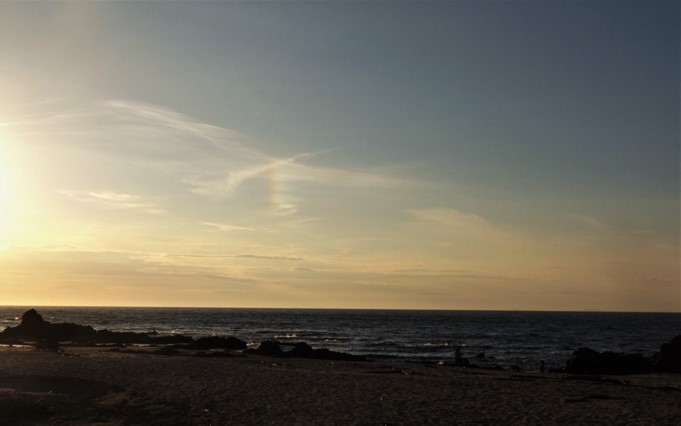 The oceans harbour a variety of natural resources that can support our current struggles with sustainability.

Wave energy, harnessing the power of waves, is renewable, predictable and free from constraint by season; which is often a problem in other renewable strategies such as solar energy. Furthermore, making use of wave power is relatively easy, with multiple collection methods, and releasing no harmful by-products. The oceans are abundant, with several major cities across different continents being perfectly placed to gather their power. Not only could this power provide a sustainable source of energy, it could also reduce conflict and dependency between continents which have a long history of political tactics for the sourcing of traditional fossil fuels. Unfortunately, within the UK, most projects focused on using wave power are abandoned due to lack of funding.

The oceans are also excellent storers of carbon, as their deepest levels can weigh down harmful green house gases and prevent them from being released into the atmosphere. While this holds promise, it should be noted that this can only continue with human cooperation. The more we contribute to raising global temperatures, the less able the ocean is to pin down carbon.

Water-dwelling plants, such as kelp or mangroves, form forests which are among the most efficient for absorbing carbon. Wetlands have been shown to hold up to 5 times as much carbon than either temperate or tropical rainforests. Yet, as recent efforts have gone into planting new trees, these powerful plants have been neglected. For example, mangrove coverage is consistently decreasing due to development projects, aquaculture and overharvesting.

Another source of sustainability that can be gained from the oceans is that of algae biofuel. Algae from the oceans would take far less resources and energy to convert into biofuel than current land-based attempts. Swapping from high intensity fish farming to nurturing seaweeds or shellfish would increase levels of marine algae. Algae’s feeding habits decrease levels of acidity and chemical waste. Additionally, algae and seaweeds could also be used to feed livestock, replacing traditional, resource intensive, soy-based feed. One study even found that cows who fed on seaweed released 2 thirds of the regular amount of methane, one of the harmful greenhouse gases contributing to global warming.

These ideas match RubyMoon’s commitment to the principles of Circular Economy. We believe that human systems should be inspired by those of the natural world. Rather than allowing resources to be wasted, they contribute to the ecosystem as fuel which fertilises new growth. As human societies overuse resources, manipulating them in ways that give them a permanent and often toxic impact, the supplies available for future generations decrease. In this same way, the more we abuse our oceans, the less able they are to support us. This is the importance of our oceans. This is why, at RubyMoon, we are actively pursuing innovative research which will place our work in harmony with the seas. What we give, we get back, and in this way, we can create a circular economy for a fully sustainable future.