Brighton Pride: a LGBTQ protest or a commercial pile of rubbish?

To Party or To Protest?’

The highly anticipated Brighton Pride took place last weekend and I was among the 250,000 people who attended the annual event, commemorating the fight for the human rights of the LGBTQ community. Shortly after the rainbow parade of self expression, Brighton was left covered in gas canisters and plastic trash. There was hardly any indication of the commemoration of the 50th anniversary of the Stonewall uprising that ignited the original protest that paved the way for LGBTQ political activism. It seems that, increasingly Brighton Pride has become a commodified booze boat for the world to sail away in- without acknowledging that Pride is in fact a protest march, not just a party parade for you to throw your rubbish at.

Every year an increasing number of companies and brands launch their creative takes on LGBTQ themed products including the ‘Lettuce Guacamole Bacon Tomato’  sandwich from M&S. Clearly they run out of creative flare when they reached the ‘Q’. Personally I think a sprinkle of Quinoa would have done the job.

And instead of event organisers charging for overly expensive tickets to watch Queerbait queens, (a term used to describe the fetishisation of Queerness for personal gain), shouldn’t we be focusing on fighting against the injustices of marginalised members of communities? Whilst also finding more sustainable ways to conserve our environment?

#Proud to be supporting Anti-Gay Politicians?

Drag queens have stated that PRIDE wouldn’t be anywhere near as spectacular if it wasn’t being sponsored by all of these corporations. However, is it not completely wrong that companies like Primark were using the hashtag #Proud in a big display of rainbow clothing allover their windows? Primark forgot to mention that they make clothes in countries like Myanmar, a country that imprisons people for their sexuality and pay children in their supply chain. And FedEx for example, who donated $1,261,500 to 75 anti-gay politicians but encourage you to ‘SHOW YOUR PRIDE’ in their adverts? Surely it would be more appropriate to create content that is honouring key activists like Stomer DeLarverie, Sylvia Rivera and Marsha P. Johnson – just some of the women who fiercely fought for the rights of the LGBTQ community.

Rather than playing an alphabet game with food ingredients, why don’t these companies focus on offering some real food for thought?! 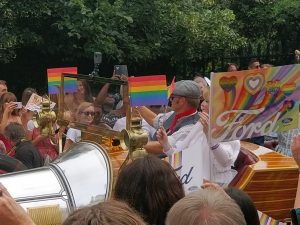 Some countries are serving a more morally driven menu to satisfy our taste buds. In Iceland, Pride banned sponsors from displaying their brand logo’s at their annual march. When asked why, the event treasurer stated that ‘we believe it’s likely that corporate floats would outshine our important message’. So the message becomes clear: stop appearing to support LGBTQ communities whilst simultaneously exploiting them.

Rave after Re-using your plastic

Not only is the commodification of gay people being capitalised by companies but our environment is also being exploited during the celebrations with tonnes of unnecessary rubbish strewn across the city afterwards. This year a reusable cup scheme was introduced as part of Brighton Pride in areas including Preston Park and the Pleasure Gardens. Despite this being a step forward in reducing single use plastic, the cups were free of charge.Therefore, there was no clear incentive to re-use or return the cups. Next year, Brighton Pride could instead introduce a deposit scheme.

Not at the Expense of the Environment

The organisers of Brighton Pride should discourage people from acquiring relentlessly rainbow injected products and instead promote a real celebration of queer liberation. We could make it an even bigger and better if we all stood together in solidarity to celebrate those who been involved in fighting for the rights of the LGBTQ community.Once everyone has shouted and marched for inclusion- then we should celebrate, drink, dance and damage our bank accounts, just not at the expense of our environment.