NEWS | 3D PRINTING AND ITS IMPACT ON SUSTAINABLE FASHION

3D printing has made remarkable progress in the past few years, from 3D pens to printing and implanting a human skull and even a kidney. However, it seems that despite all this, the clothing industry has been lagging behind until now.

The first high profile 3D printed clothing project was by design studio Nervous System. They created a dress with the ability to move like real fabric using a software called Kinematics, which allows the designers to use origami-like techniques to print a structure composed of triangular shapes with varying sizes. They can then arrange the segments and add hinges to lock the structure together. 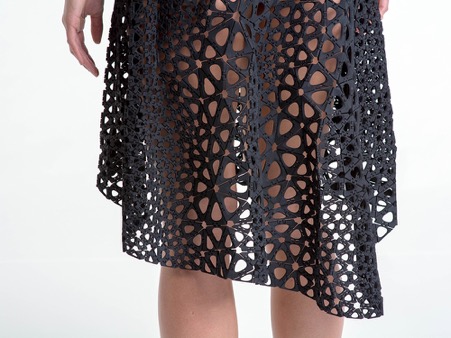 However leading-edge the project was, the dress was criticized as not being ready-to-wear or suitable for the consumer market.

This project spurred more notable designers to experiment with 3D printing in their collections, for example Iris van Herpen now incorporates a 3D printed design in each of her collections. Her most famous design was the almost translucent ice sculpture-like dress, seen below. 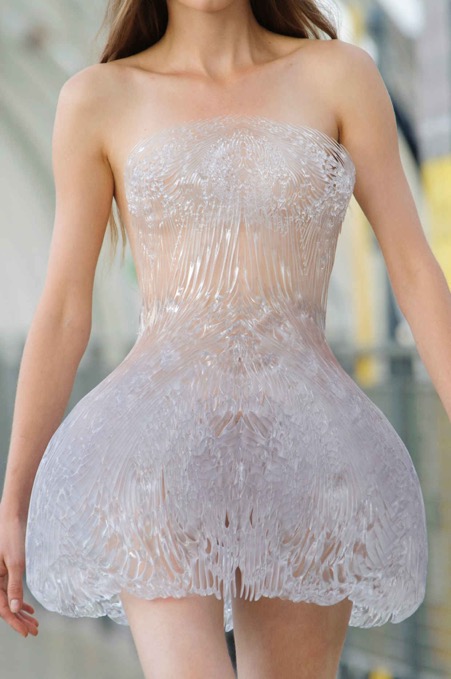 It was created in partnership with American company 3-D Systems, “the process has been used for industrial applications up until now, and the way it works is that a beam of ultraviolet light is focused onto the surface of a vat filled with liquid photopolymer, so layer by layer the photopolymer hardens and you pull this print out of the vat and there you are! It’s really an amazing process to watch.”

Although stunning to look at, Herpen’s designs are no closer to ready-to-wear, the dress had to be designed to fit the model so is typically only suitable for haute-couture, and there would certainly be no sitting down involved.

Danit Peleg’s graduate collection for Shenkar College of Design in Israel was the first step towards making ready-to-wear sustainable clothing. She found a much softer material to work with which gave it the feeling of flowing fabric when it moved. It took her a full nine months to create the collection. “It took more than 2,000 hours to print everything, not including the tests and trials I was doing before,” she said. “It’s about 400 hours per piece.” That meant she had to use three printers and keep them running 24/7 in order to meet her school’s deadline, this raises concerns about the true sustainability value of the printing. 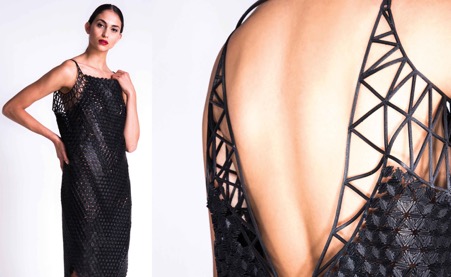 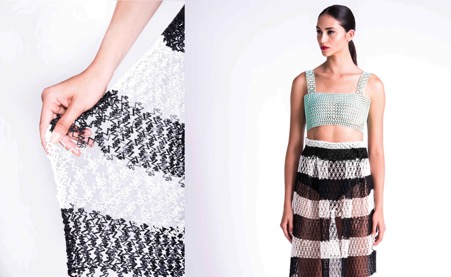 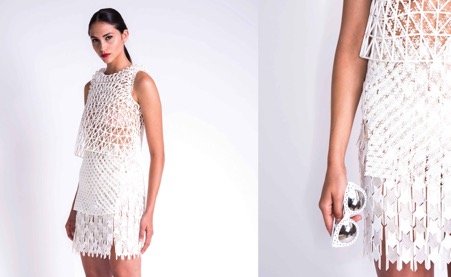 That being said, there are many ways that a rise in 3D printing can have positive affects on sustainability. For example, it can lower the carbon footprint as most of the trial and error of the designing process can be done digitally so lessens waste material. The printers can also be used locally in the designers own home or studio which removes the need to transport materials to factories from overseas.

The products only require the exact amount of material that has been calculated that it needs to produce, so also no waste products.

There is also the opportunity to use recycled materials, some currently being used include everything from nylon filaments, plastics, metal and silk. There are already companies like EKOCYCLE founded by entertainer Will I. Am and Coco-Cola who are marketing the Cube 3-D printer intended for home users. Their cartridges use filament processed from discarded plastic soda bottles.

Another avenue which could be explored further is that of extending the life of existing products, such as making an extra button, repairing shoe soles, etc.

However, there have been some concerns as to the knock-on effects of the expansion of this exciting industry, for example, if people could theoretically print their own clothes, what would happen to the thousands of manufacturing jobs? Authenticity could also become a huge issue, imagine if people could download the code to make an exact replica of a tiffany bracelet or the Chanel branding and paste it onto a knock-off handbag?

These concerns all seem a bit too far fetched for now, but seeing as technology has advanced so extraordinarily fast in the past decade, who’s to say what is or isn’t possible anymore?

What are your thoughts on 3D printing for the fashion industry? Beneficial or a disaster waiting to happen? Send us a tweet @rubymoonswim