“Algaemy” aims to replace hazardous chemicals in clothing with environmentally friendly single-celled organisms. Algaemy is an analogue textile-printer which produces its own (surprisingly fast-growing) pigment. A wide color palette from different shades of blue, green, brown and even red derives from various species of microalgae.

When it comes to chemical and water use, the textile industry is inherently unsustainable. In a report conducted by Greenpeace, it was found that approximately 25% of chemicals manufactured globally are applied in the textile industry. It also revealed the startling amount of hazardous chemicals in children’s clothing from major retailers around the world.

Berlin-based design studio Blond & Bieber founded by Essi Johanna Glomb and Rasa Weber have found a unique way to make light-stable colors without heavy chemical use – by using algae instead.

After researching the different species of Algae in a laboratory, they developed a living colour palette that they then printed on a series of cotton clothing items and leather shoes.

There are over 60,000 different forms of algae, but they’re working on their own personalized palette of 15 different species especially for fabrics. Unlike light-stable dyes normally used on clothes, the algaemy colours change over time when exposed to sunlight- every piece tells a story over time.  Seeing as the fashion industry is largely based on ‘fast fashion’ cycles, constantly revolving around short term trends, the idea of clothes which can gradually change over time could be ground breaking.

Whilst exploring the idea that adding value to clothing through changing colours, sustainability is also at the heart of the collection.

“We think it should be normal to think in a sustainable way without having it communicated as organic or eco-design,” Glomb says. “Of course you should think about sustainability.” 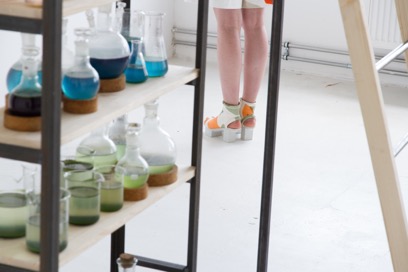 Image: via Blond and Bieber

Microalgae has been researched extensively over time as it has potential in several fields such as nutrition, energy- and oil production, filtering qualities and even carbon dioxide absorption.  However, the textile and creative value has not been fully explored, which is one aspect which makes Blond and Bieber’s work so innovative.

Amongst the profound idea that clothes can truly be dyed from algae, with the added bonus of the ability for them to change colour, the beautiful, bold designs of the clothes and shoes truly make it a great moment for sustainable fashion. 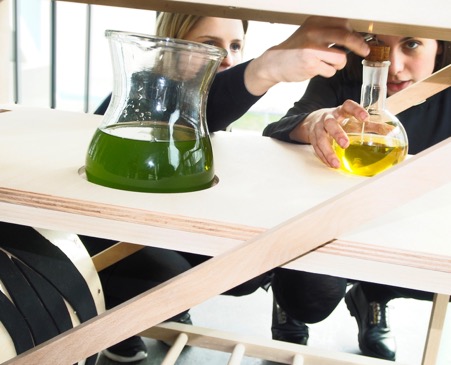 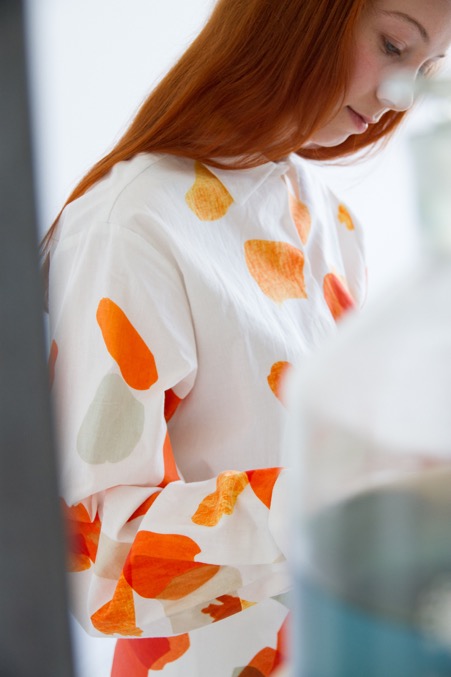 Images and information courtesy of Blond and Bieber