Ocean’s Angels- Are they really answering our sustainability prayers?

As summer is well underway, many will now be diving into continental seas, or perhaps dipping tentative toes into slightly colder water here at home. For those of you making a splash, now seems a good time to raise awareness concerning the high levels of waste plastic in our oceans; and point to those who are making waves in innovative technology and design to overcome our ocean’s burgeoning problem.

Plastic waste now accounts for up to 80% of the total debris in the oceans. It is the number one source of pollution in the oceans, and is symptomatic of the disposable lifestyle many are defined by. Killing over a million seabirds and 100,000 marine mammals every year, tainting the natural beauty of coastlines across the world, and disrupting an entire eco-system, our throwaway use of plastic is not sustainable. However, there are now designers (like here at Ruby Moon) trying to wean themselves off what ethical designer Cyrill Gutsch’s calls, the plastic “drug”- by using recycled ocean plastic, fishing nets and debris in their products.

Adidas, (who in the past have been known for their unethical practices) have teamed up with sustainable fashion pioneer Stella McCartney, and environmental group Parley for the Oceans, to create a running shoe. While it is currently only the upper that is made from recycled ocean plastic, each pair of shoes does contain up to eleven plastic bottles. The trainers signal a change in direction for Adidas as a brand and the trainer industry itself. In a clever marketing move the first 50 pairs could not be bought, but had to be won in a video competition requiring entrants to demonstrate their commitment to ending single use plastic items.

Following the success of this enterprise, they have joined forces again in creating a collection of swimwear made from upcycled fishing nets and debris. 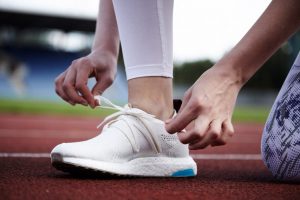 Similarly, Dutch denim company G-Star RAW have launched a collection of denim garments made from recycled ocean plastics. In collaboration once again with Parley for the Oceans, as well as textile company Bionic Yarn, the tag line: “Turning the tide on ocean plastic pollution” indicates a change in the fashion world and the insurgence of recycled plastic as a breakthrough material. Their partnership with singer Pharrell Williams also signals the ever-increasing presence of celebrities in the fight for sustainable fashion. (See recent blog post on 10 Celebrities endorsing ethical fashion). 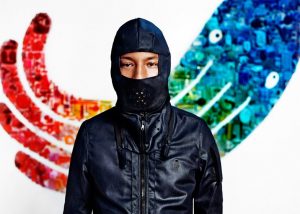 While such efforts by G-Star and Adidas do exemplify a positive new trend developing among fast-fashion brands; questions can be raised about the genuine intentions of such marketing- and the actual sustainability of products. Using plastic to make denim for example, whether recycled or not, fails to consider the future of the product within the cradle-to-cradle design structure. Recycled plastic still ultimately remains non-biodegradable. 100% organic cotton could be considered as a more appropriate or sustainable material for making denim.

Such a failure to consider the life-cycle of a material, could point to the possibility of these products, which are marketed under the guise of sustainability; being sold simply to fill the gap in the market, and jump on the sustainability ‘band waggon’ that is increasingly gaining momentum.

Similarly, the Adidas trainer (as mentioned before) is marketed as being “Made from Parley Ocean Plastic”- yet only a minor part of the shoe is made so. If we are to be purists about the sourcing of materials and the actual sustainability of them, (as we are here at Ruby Moon), these factors then have to be considered.

Parley for the Oceans work with Adidas and G-Star has now also influenced architecture designers. Spark’s series of beach huts in Singapore resemble giant pine cones, and are also crucially made from recycled ocean plastic. Their location along the East Coast Park not only works practically by providing shade for tourists, but act as bold visual reminders of the effects of ocean plastic. 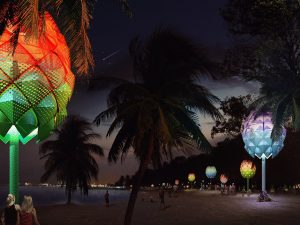 Brodie Neill’s terrazzo effect table is carefully curated from small pieces of plastic, recovered from beaches in Tasmania, Hawaii and Cornwall. The blue, white, brown and green chips of plastic merge beautifully into a speckled top resembling the ocean. Neill’s work was commissioned for the London design biennale in 2016, the theme being centred around ‘Utopia by Design’. Neill’s use of the recycled plastic for his work in relation to this theme, interestingly highlights the role this material could play in the creation of a better world; Utopia meaning an imagined place where everything is perfect. 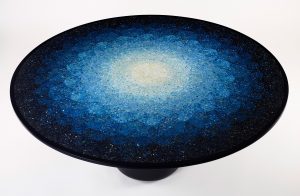 Lush have introduced a more old-world way of packing products- that does not involve wasting paper. The innovative and sustainable mode of knot wrapping something, pays homage to the Japanese tradition of “Furoshiki”. Wrapping a product in a beautifully decorated piece of reusable material, not only looks more presentable when giving gifts, but saves the planet. They can also be used to wrap your lunch, act as an individual hair scarf, or an impromptu picnic blanket- who knew one item could have so many potential uses? 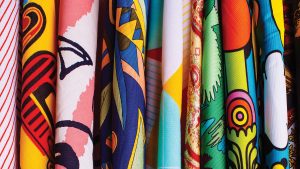