Out Of Sight, Out Of Mind: Who Made Your Clothes?

For Fashion Revolution week I wanted to share a recent visit to the Tenement Museum in Manhattan – Founded in 1988 by historian Ruth Abram and social activist Anita Jacobsen, the museum tours explore the uniquely American story of immigration and the rich, diverse landscape it continues to create. The Museum took root when Abram and Jacobsen discovered 97 Orchard Street — a dilapidated tenement building that had been shuttered for more than 50 years. Although in ruins, many of the personal artifacts of the generations that lived there remain and a whole series of tours have been developed around the inhabitants and their histories. 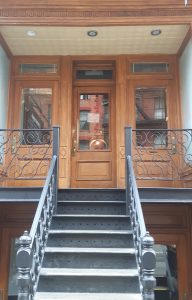 One such tour is called The Sweatshop Tour and of course, this was the most interesting to me. We learnt the family history of two sets of immigrant families involved in the ‘rag trade’ who resided at 97 Orchard Street: the Levines and the Rogarshevskys.

The Levines operated a garment workshop in their tiny apartment there from 1892. Harris Levine, the patriarch, hired three workers and worked long 15-hour days, stopping only to observe the Sabbath. A family of six, the Levines managed to raise their children and compete with other garment shops for 13 years — and all within a 325-square-foot apartment! The apartments were humid and the faster the contract work was completed, the quicker they would get paid- hence the expression, ‘sweating’ the workers and ‘sweatshop’. Interestingly the word ‘shlepping’ was also coined here- the transport of ‘cut work’ across the streets of lower Manhatten to be sewn.

The Rogarshevkys faced a similar living challenge in 1908. With six children, the Rogarshevskys creatively squeezed into their tiny three-room apartment and the father, Abraham earned a living as a garment presser in one of the neighborhood shops. It was a job that would take a tremendous toll both on Abraham and his family after his daughters became employed in the same industry. Female textile workers in particular — were subjected to abysmal working conditions, marked by crowded, unsanitary facilities, long work days, and miserable wages. Garment industry workers often worked in small sweatshops or small factories and work weeks of 65 hours were normal, and in a season they might expand to as many as 75 hours.  Workers could be fined for being late for work or for damaging a garment they were working on. At some worksites, steel doors were used to lock in workers so as to prevent workers from taking breaks, and as a result, women had to ask permission from supervisors to use the toilet.

The locking in of workers to increase productivity led to the tragedy at the Triangle Shirtwaist Factory fire on March 25, 1911, one of the deadliest in U.S. history. The fire caused the deaths of 146 workers– 123 women and 23 men– who died from the fire, smoke inhalation, or falling or jumping to their deaths. Most of the victims were recent Italian and Jewish immigrant women aged 14 to 23.

Of course, standing there in the small apartments, I was instantly struck how both fire and the intolerable working conditions are repeated now in Bangladesh, with fire being the main cause of death of garment workers- of mainly marginalised women with no other form of income. So, why,  over 100 years later are we still allowing this to happen?

Out Of Sight, Out of Mind

Although NYC was producing most of Americas clothing at the turn of the 20th Century, the manufacturing was hidden from view, in small factories and homes. Those buying the garments had no idea of the conditions that prevailed. It is the very same today- our clothes are made ‘out of sight’  in similar circumstances- and because we do not see this reality ourselves- it does not feature in our experience of enjoying ‘fashion.’

How clothing is produced is not often considered, even among highly educated people, who I have seen gasp when I have told stories about my experiences of factories in Southern China.

So 110 years later, we have let our sisters take the burden. We have exported our garment industry without exporting the better working conditions that we have fought for ourselves by striking, forming unions and demanding change. In Bangladesh, 1,134 garment workers died in a similar accident at Rana Plaza and currently 3 million garment workers toil in danger from the factory fires that break out weekly: here you can download a letter to the Bangladeshi prime minister to support victims of a Dhaka factory fire on March 28th, 2019.

These textile workers are ‘out of sight, out of mind.’ That is why Fashion Revolution always asks, ‘WhoMadeMyClothes?’ Because just as Americans did not ‘see’  the seamstresses and tailors in Manhattan, we need to open our eyes, acknowledge and fight for those without a voice.